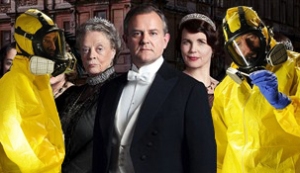 Scene – Lord Grantham, in breakfast tuxedo, wanders about the first floor of the house, squinting and covering his eyes.  He looks for his wife, worried.  Elegantly dressed servants and family members rush about, bewildered.  A peculiar smoke and an awful odor permeate the manor.

LORD GRANTHAM
Cora!  What’s that awful smell?!  Is that from the kitchen?

Mrs. Padmore, the cook, covering her head, runs out through the back door.

There’s a tremendous BOOM that rocks the house.  Debris falls everywhere and blue crystals float about the air like snow.

LORD GRANTHAM
My God!  Was that an explosion?!

Lady Edith, Lady Crawley, and Lady Mary – all in elegant morningwear (except Lady Mary who wears elegant mourningwear) – rush in, panicked and cower behind furniture.  They are quickly followed by two men in gas masks and yellow Tychem hazmat suits.

HAZMAT MAN 1
Sorry!  Sorry!  Does anyone have a phone I could borrow?

LORD GRANTHAM
Are these more friends of yours, Bates?!

Hazmat Man 2 goes over to the women hiding behind the furniture and holds his arms open to them excitedly.

INT.  WHITE LIVING ROOM – NIGHT
SKYLER, tearful and distraught, speaks on the phone to WALT.  POLICEMEN, nearby, listen in on the conversation.

WALT
I’ve still got things left to do.

Walt hangs up and attempts to rip his cellphone in half, but – surprisingly – it doesn’t break.  Ferociously, he twists and twists and twists at it.  He smashes in against his car.  It still doesn’t break.  Angrily, he throws the phone to the ground and jumps up and down on it.  He pulls out a gun and shoots it.  He picks the phone up and stares at it, wide-eyed.  It’s in perfect condition.

MONTAGE of Walt trying different methods to destroy the phone.

* METH LAB – in yellow, Tychem hazmat suit, Walt holds the phone – via pincers – over a vat of bubbling, smoking acid.  He dips the phone, then brings it back up.  The phone is perfect.
* BEHIND GARAGE – Walt tries to pull the phone apart via gigantic electromagnets.  A nearby RV shakes uncontrollably.  The cellphone doesn’t move.  Walt reacts, impressed.
* LARGE CONCRETE BUNKER – Walt flings a piece of crystal at the phone, which causes a massive explosion.  The phone remains unharmed.  Walt stares, agog.  The phone BUZZES.

Walt stares at phone.  A devious idea comes to him, and he grins.

EXT.  SAUL GOODMAN’S OFFICE
Walt rushes out of the office, gun dangling by his side.

EXT. HIGHWAY
Walt with giant barrel of money and bags waits to be picked up by SAUL’s NEW IDENTITY MAN.  A van pulls up, Walt gets in.  The van zooms off.

INT.  LIVING ROOM SET – DAY
A cheery INFOMERCIAL.  Walt, poorly disguised, with dark full head of hair, muttonchops and a skewed Dali-esque moustache, sits on a large couch next to his cheerful young new WIFE who cradles their newborn baby SON.  They look very familial and sit across from JOAN RIVERS.  Joan holds up a bright, crystal blue cellphone and addresses the camera.

JOAN
You can smash it, bash it, crush it, drop it out of a plane, poison it with Ricin!  This phone will work!  What’s it called again?

WALT
(proudly) The Flynn.  Made from my own special sauce!

JOAN
And if billionaire Whitey Waltzenberger –

WALT happily points to himself.

JOAN
– and his family believe in it, you should too!

WALT and his new WIFE joyfully hold up their phones.

JOAN
Can I keep this?

WALT
I would advise against it.

They all laugh.  Walt starts to cough – and coughs up some blood into his hand.

SUPER
The FLYNN
$39.99 for the next 20 minutes!
May not be available in New Mexico